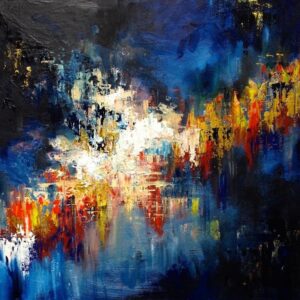 In thinking about it, I believe there must be a connection between synesthetic experiences and the prophetic gift.  Without getting into the theology of it all, it goes without saying that the prophets and many believers throughout the scriptures had dreams, visions, saw, heard & spoke to angels, were translated in a moment to distant places, and witnessed miraculous occurrences that outside of supernatural influence could not have happened.  How does this support a connection between synesthesia and the prophetic gift?  To me, the two seem to have a similar root; a similar purpose:  communication.

I first recognized synesthesia’s existence in my own life when I was recording my third record One Spirit with a producer in Vancouver, BC.  His studio location made it more challenging for me than I’d experienced while recording with local producers on my previous two records where I lived in San Antonio, TX.  So, I traveled from our home in San Antonio to Vancouver three times to record vocals and work with musicians but spent the rest of the production time communicating with him by phone regarding sounds, arrangements, and dynamics.  Explaining exactly what I needed for each song proved to be such a creative challenge for me that it seemed to provoke a whole new sense for how to explain it.  That’s when I began actually seeing and describing the sounds to him as colors!  I began telling him what I was seeing and it proved to be very successful:  an oboe is brown, a flute is a bright yellow, a baritone guitar is black, drums are shades of blue, the vocal is orange, etc.  In this way, I could express what each song’s sound palette was composed of, and what it might look like as a completed painting full of mood, movement and color.

Now, although the Bible doesn’t say it, Mary (among others not known in scripture as prophets) may have had a prophetic gift, and a synesthetic ability to see and hear the angel Gabriel.  Upon seeing him and believing that God had sent him, she was given the ability to communicate the foretelling these events with Joseph, Elizabeth, and others.  When we see and hear things that others don’t, it opens a door of opportunity to exercise faith and communicate what we have seen or heard, delivering a message that needs to be heard.  In doing so, we can encourage and express new possibilities to be considered.  New ways of looking at things.  New perceptions of reality.  John 1:16 says, “ Because He was full of grace and truth, from Him we all received one gift after another.”  The gifts of God are many, they are dynamic and they are for helping us all to experience what is beyond the natural; what is of the Spirit.