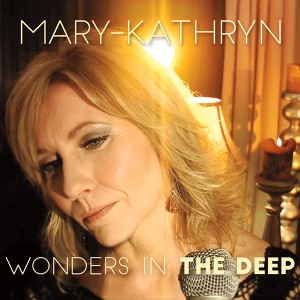 There are a few artists who somehow manage to create music that pierces through the mundane. From the first time we hear them, there is an intimacy, a fire, a subtle shade of interpretation that spurs our imaginations. With repeated encounters comes a warmth and familiarity that is at once visceral and spiritual. We connect with them. We feel we know them. Mary-Kathryn is such an artist.

Co-written and produced with lead guitar player and Producer Paul Buono, Wonders In the Deep is a rhythmic blending of pop, rock and folk elements along with world music influences as diverse as the continents. With her latest release, Mary-Kathryn continues to create a spiritual amalgam that transcends musical boundaries. Sophisticated without being elitist; understated without being simplistic, Mary-Kathryn displays an emotional depth that can only be described as remarkable. Each song paints word pictures on an aural canvas using exotic instrumentation, adroit production, and lyrics that are nothing short of God-haunted.

“Wonders In the Deep is part of the evolution from where I first started. At the beginning of my recording career I was heavily influenced by Enya’s music, which I felt had a very spiritual aspect to it. But as time passed, it became much more rhythmic, much more world music influenced. This record is very guitar-driven; more so than previous projects, using live strings – cello and piano. When creating and recording I’m very intentional about the sounds I use. For me, each sound is a color and a voice that is speaking beyond the words. So many people have told me that my music is very visual, and very experiential. I couldn’t ask for more.

“Paul Buono and I started working on it in 2009, and we finished the music production in 2010. Time went by and life happened. My daughter went onto the mission field – she was in Jordan and Cairo during the Arab Spring.  It was a scary time but God’s hand was so evident.  My son got married, then my daughter came back home.  I just knew that all kinds of stuff was going to happen when I started work on this album.  It all ended up being very prophetic.

“I prefer being independent. I can live my life without having to be pushed along, or steered into a particular direction just because ‘someone higher up at the label’ thinks that’s the flavor of the month.  As far as it being a challenging lifestyle, everyone I talk to, whether they are an independent or a label artist, still faces the same challenges.

“I think Wonders in the Deep turned out to be something really special, and can reach an audience I haven’t impacted before. My previous CD, Dreams and Visions, really impacted the New Age community, but this record goes in a completely different direction. It’s more attuned to the NPR audience.  I’m thrilled to see where it’s going to end up.”

Wonders in the Deep is available at CDBaby