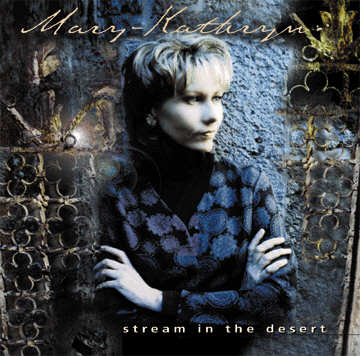 The title cut, “Stream In The Desert”, captures the theme of the album and is the result of a vision Mary-Kathryn had in church one Sunday morning. “Part of that vision was every believer in a water line passing the water from one to the other and working together to take the Living Water of God to a thirsty world,” she recalls. The song’s lyrics encourage believers…..

Be a stream in the desert
Take God’s love to all you can
Flowing down from the mountain
Guided by His loving hand
Run together. make a river
Running through this desert vast
Taking water to the thirsty
Taking water that will last
1998 Elements of Praise/BMI

Mary-Kathryn’s own desert experience influenced her on many of the songs. Three of the songs, “Reaching,” “I Know” and “Child, I Love You,” were written out of a time when I was longing for more of God; a time of really reflecting back on where I’d been and how God had brought me through. “Stream In The Desert,” “Tehillah” (Hebrew for praise) and “I Understand Now” were written afterwards when I realized, “Okay, now that I’ve come through the desert, I know what I want to give people, I understand how You’ve brought me through and I want to be a stream in the desert for others.”

Pointing out that Scripture says the truth of God is written on every man’s heart Romans 2:14-15, Mary-Kathryn hopes to appeal to anyone who is seeking the deeper things of God… a group that includes Christians as well as seekers.

“Seekers are spiritual people, people who are looking for a spiritual experience, so let’s point them in the right direction. Let’s show them Jesus,” she affirms. “Christianity is not a club, it’s not a Sunday experience; it’s a daily walk, it’s a relationship. That’s what I want them to know. But believers, too, are seekers in the sense that we are always seeking more. If we’ve arrived, we’re not growing. We have to always be ready to change and be open to what God wants to do in our lives.”

Mary-Kathryn’s goal is to encourage believers to “stir up” the gifts within them, pouring them out in service to others. She’s doing just that – making a stream in this vast desert of life and encouraging others to do the same.

5 thoughts on “Stream In the Desert”